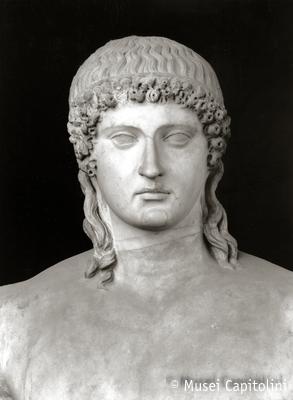 In this work, Apollo is shown nude and stands upright with his weight carried on the left leg. His left leg and foot are slightly advanced, as if the god were taking a step forward.

His right arm hangs close to his body and the right hand originally held a laurel branch. The slightly bent left arm once supported a bow and arrows, typical attribute of the god.

This style was common in the fifth century B.C. and is sometimes called the severe style.

There are more than twenty known replicas of this type. The head of the Museum’s copy is ancient but likely not original to the piece.

The depiction of movement was a struggle for ancient sculptors and the Kassel style represented a literal step forward because for the first time the legs of sculptures were separated and one moved forward enough that the intent of motion was obvious.

This statue of Apollo is a replica of the famous Apollo made by Phidias in the Kassel style.

This work dates to the Trajanic/Hadrianic Periods (100-130 AD). It was probably found in Rome.