The statue depicts young Hercules fighting with an animal that was probably the Ceryneian hind (a large mythical deer).  During a restoration, the animal was resculpted as a hydra by Alessandro Algardi. 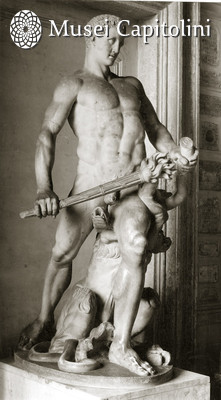 The work is a Roman interpretation of a Greek statue attributed to Lysippos (4th century BC) who, according to sources, sculpted the 12 labours of Heracles.

The entire structure of the figure has suffered the effects of 17th century restorations, which changed its appearance. The figure was originally portrayed in the act of struggling with the animal.  His left leg was forward and originally pointed towards the side of the animal, while his right leg pulled back, stomping on the animal’s leg.

The statue’s hands were also rearranged during a restoration. In the statue’s original condition, Hercules probably pulled the animal’s right horn toward himself with his own lowered right hand and pushed the left horn away with his raised left hand.

The subject and form of the original statue is known though a series of replicas.

The original sculpture dates to the 2nd century AD.

It was found, almost certainly, during the restoration of the church of S. Agnese in via Nomentana.