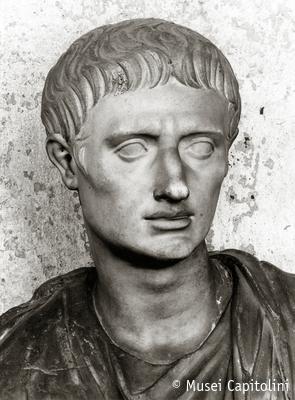 The man, wearing a tunic, a cloak that falls on his legs and laced footwear (calcei), is holding a scroll and tablet in his hands; the pose is therefore one of an intellectual, according to a common iconography.

His face, turned towards the left, displays the vigorous features of a man still in his youth. His expression is marked by the shape of the eyebrows, beneath which his large eyes are opened wide. He has high cheekbones and full, slightly open lips. His hairstyle, with the first row of curls in small wavy locks that fall upon his forehead, forming the typical “pincer-like” motif, was fashionable in the early Imperial period.

The work dates to the Tiberian period (14- 37 CE). It was probably found in Rome.