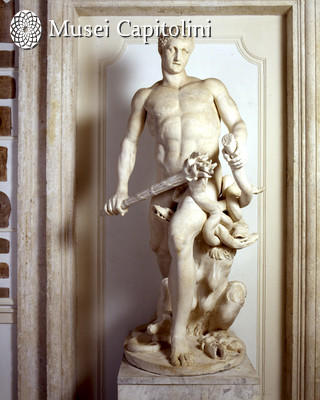 The statue depicts Hercules, here shown as a young man, fighting a hydra with snake-heads emerging from a feline body. The only ancient part of the sculpture, however, is the torso of Hercules; the monster, in fact, is the result of extensive restorations performed in the 17th century by the sculptor Alessandro Algardi. The ancient fragment displayed on the right (Scu 237), consisting in a leg with a tree-trunk support encircled by a hydra, was perhaps the model used by the seventeenth-century sculptor to restore the torso. Modern restorations also include the hero’s right arm and the hand grasping the torch, the base with the right leg below the knee and the left leg up to the thigh.

As suggested by the position of shoulders and legs, the hero originally was forcing down some foe below or in front of him; parallels with ancient mosaics and reliefs illustrating Hercules’ labours suggest that the monster in this case was the Ceryneian hind

The statue, datable to the 2nd century AD, derives from a Greek original attributable to the sculptor Lysippos who, according to ancient sources, had created sculptural groups illustrating Hercules’ labours.

Found in the 1620s during the refurbishing of the church of S. Agnese on the via Nomentana, the sculpture entered the Verospi collection and in 1738 was bourght by Clement XIII for the Capitoline Museum. The statue was displayed in the Atrio of the Palazzo Nuovo vefore being moved to its actual location in the early twentieth century.