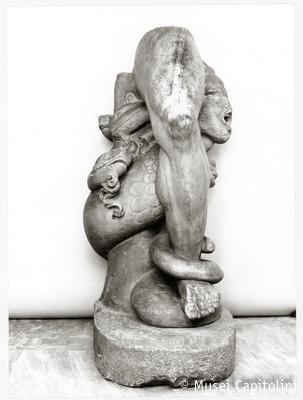 The monster’s serpent-shaped body is crowned by a female head with the mouth open in agony and the hair consisting of snakeheads; small serpents in metal were probably inserted into tiny holes framing the forehead. The snake’s coils encircle a tree-trunk support and Hercules’s leg, cut off at the thigh; the hero is crushing the spires under his foot.

The piece was extensively restored in the 17th century, presumably by the sculptor Alessandro Algardi’s, in order to match the Hercules’s torso now displayed on the left (Scu 236) and restored as Hercules fighting the hydra; however, for reasons which remain obscure, the seventeenth-century restorer preferred to adapt the torso to a new sculpture modelled on the ancient fragment which, therefore, was never used.

The sculpture, datable to the 2nd century AD, is a Roman copy of a Greek original attributable to Lysippos who, according to the ancient sources, had created a sculptural cycle dedicated to Hercules’s labours.

The fragment is believed to have been found in the early seventeenth century near the church of S. Agnese on the Via Nomentana, apparently a few years after the Hercules’s torso now displayed on the left (Scu 236). It has been suggested that the two fragments had originally belonged to the same decorative cycle illustrating Hercules’s deeds.

The piece was ourchased for the Verospi collection in the mid seventeenth century and in 1738 was bought for the Capitoline Museum by Clement XIII. Before fiding place in the Galleria, it was displayed in the Atrio of the Palazzo Nuovo.