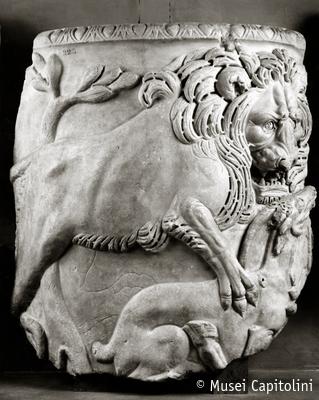 Fragment of a tub-shaped sarcophagus decorated in the upper part by a Ionic kyma.

The fragment belongs to the tub-shaped class of sarcophagi, decorated on the sides by prides of lions attacking their prey, very widespread between 270 and 310 AD.; the front was undoubtedly strigilated (decorated with S-shaped grooves) as in the case of most of the examples.
It is most likely that the intended users of this class of sarcophagi, especially the largest and highest quality examples, were magistrates whose public job duties included the organization of games.

The mediators that dealt with the capture, taming and sale of the animals, earning large sums of money and considerable social prestige, have been considered as among the possible purchasers.

In addition to an indication of the deceased’s status, the ferocious lions have also been interpreted as an apotropaic motif, to scare away anyone wanting to harm the sarcophagus, or as symbols of death, but also that of victory over death, equal to the sarcophagi with lion hunting scenes, also widespread in the 3rd century AD, in a period of political instability pervaded by a profound spiritual crisis and characterized by mystery rebellions and abstract philosophical trends.

The figurative theme recalls the iconographic collection of the venationes; these images of battles in fact were supposed to remind one of the lions (captured in ever-increasing numbers during the 3rd century AD in Africa) fighting in Roman amphitheaters, also because several lions are depicted in harnesses, with straps that gird their bellies and backs.