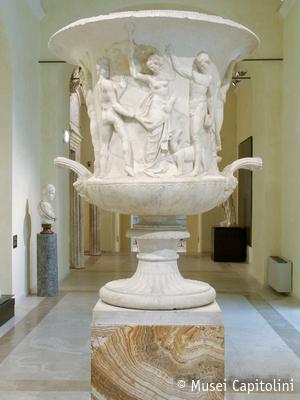 This grand object is a krater, a Roman vessel used for the mixing of wine and water. Its surface is decorated by finely carved reliefs that show chaotic scenes associated with the god of the grape harvest, wine, and merriment making, Dionysus. Although the names are interchangeable, this deity was more commonly known to the Romans as Bacchus.

At the center of one side of the krater, a maenad (female follower of Bacchus) with long flowing hair is depicted. She seems to be overcome with the wildness and loss of self induced by the god. The woman raises her right arm, while her left arm clutches at a piece of her mantle, which has fallen around her legs. To the left we see a naked young Satyr who is turned towards the woman and grabs at her clothing as if to pull it away from her completely. To the right there is a second nude Satyr who has looked away from the others to glance at the panther (a symbol of Bacchus) near his feet. His raised right arm is the result of restoration; his left arm hangs by his side and in his left hand he holds the flute of Pan.

Behind the Satyr on the left, we find another figure who is busy pouring the contents of a goatskin into a large krater decorated with garlands.

On the other side of the krater we find two scenes: to the left the rape of a maenad by a bearded figure, probably Pan, who is identifiable from his goat feet. To the right we see a much happier scene of a graceful maenad shown dancing. She glances behind at a young satyr who is kneeling and holding something out to her in his right hand. The maenad wears a tunic and mantle that flutter in the wind as she moves. Her arms are raised and in her hands she holds a lyre.

The krater has survived the passage of time intact, although its handles are the products of restoration. Below each of them is a small bearded head crowned with ivy that represents Silenus, companion of Dionysus.

The work dates to the first century A.D. and was found on the Esquiline hill in Rome, at Piazza Manfredo Fanti.