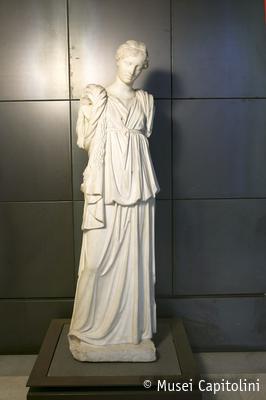 The character wears a pleated peplum with wide and regular folds, fastened by a belt under her breast and a shawl folded under her armpits, which appears much more ample and fringed on the right shoulder.

The statue is placed on a plinth in a slanting position, like the statue of the “draped girl” with which it shares many features: its height, for example, the way the head – made separately – is carved, the quality of the marble, the fairly accurate back surfaces that were not meant to be visible, the shiny and smooth skin, the rather coarse carving, carried out with a chisel only, of the hair gathered behind the nape and parted on her forehead.

It is likely that the two statues were produced by the same workshop and that they were part of a single group of sculptures. Because of their position that favours a three-quarter view, one could infer that the group was meant to be placed in a semicircular space.

This sculpture is the result of an eclectic taste inspired by different models; actually, the belt fastened high under the breast is a hallmark of the end of the 4th, but the lower part of the drapery recalls older models, close to Myron’s Athena.

The statue, which falls between the late 1st and the early 2nd century AD (50-138 A), was restored as “Musa Cithareda” (zither player) immediately after its discovery near Villa Palombara (on the Esquiline hill); now the zither and both arms, as well as all the plaster integrations, have been removed.