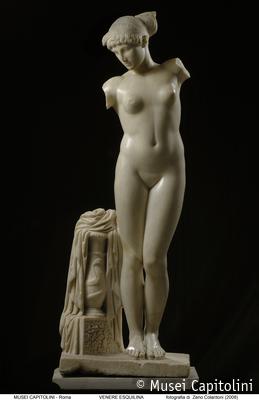 The statue, known as “Esquiline Venus” , represents the goddess girdling her hair with a strip of fabric. The figure appears without both arms as modern plaster integrations have been removed; the weight falls on the right leg, while the head and torso are slightly tilted forward and to the right, while the left leg is flexed.

The goddess is completely naked, as she wears only sandals with straps adorned with little hearts that are likely to be an addition by the copyist; their shape resembles other examples also found on statues of the 2nd century AD.

The hair, kept in place by a fillet, are tied at the back of the nape and completely lack any light-and-shade effect. The hairstyle, characterized by snail-shaped curls on the forehead, is reminiscent of the male heads of the severe style, in contrast to the body that, on the contrary, recalls Hellenistic prototypes. Moreover, the position of the arms and torso find some comparisons with the Diadumenos by Polycleitus .

The pedestal on which the statue rests its right leg consists of a vessel decorated with Egyptian style ornaments such as bundles of papyrus and the coils of a snake.
It rests on a casket full of flowers and is topped by a cloth, with two edges, that falls delicately down, touching the statue’s plinth. The vase and the cloth are toilet articles indicating that the goddess was preparing for her ritual bath.

The sculpture, found near the Villa Palombara, dates back to the age of Hadrian (117-138 AD), as evidenced by the style of the drapery, the sandals, the decoration of the plinth and by the contrast between the smooth, polished surface of the face and the lack of light-and-shade effects in the rendering of the hair.