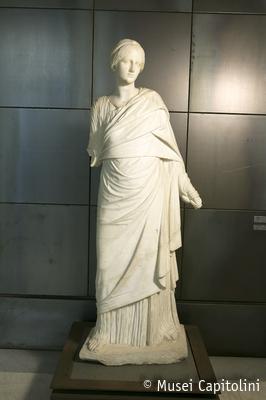 The statue represents a young woman, standing, with her legs slightly apart, who wears a long chiton and a himation. This garment covers her left shoulder and enfolds her left arm and hand; then it drapes in three large folds on her breast and drops along her body, down to her sandal-clad feet.

The expression of the girl’s face is childlike and almost sentimental, which contrasts – as well as the upper part of her body – to the rest of the figure that looks like that of a mature woman.

The statue is placed on a plinth in a slanting position, like the statue of the “girl with a peplum” with which it shares many features: its height, for example, the way the head – made separately – is carved, the quality of the marble, the fairly accurate back surfaces that were not meant to be visible, the shiny and smooth skin, the rather coarse carving, carried out with a chisel only, of the hair gathered behind the nape and parted on her forehead .

It is likely that the two statues were produced by the same workshop and that they were part of a single group of sculptures. Because of their position that favours a three-quarter view, one could infer that the group was meant to be placed in a semicircular space.

This sculpture is the result of an eclectic taste inspired by Attic examples; for instance the influence of Praxiteles can be recognized in the rather sentimental expression.

This statue, which falls between the late 1st and the early 2nd century AD (50-138 AD), was found near Piazza Dante and is now on display after the plaster integrations of the missing parts have been removed.