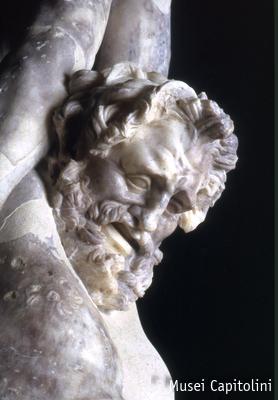 The monumental statue represents the silen Marsyas hanging on a tree, waiting to be flayed upon order by Apollo . The work stands out for the pathos expressed by the silen, seen both in the features of the face, altered by fear and pain, and the body where the muscular tension is marked with great realism.

The statue has been reassembled from various fragments. The lower part of the legs, the hands and part of the forearms are restorations.

Known copies of this statuary type are in white marble and red marble; the latter was likely used to emphasize the effect of the flaying.

The group was completed by the statue of the Scythian skinner kneeling at Marsyas’ feet and sharpening a knife, and the image of Apollo sitting and presiding over the scene.

It is a Roman Imperial copy of a Late Hellenistic original (3rd cent. BC).

The work comes from the Auditorium of Maecenas.