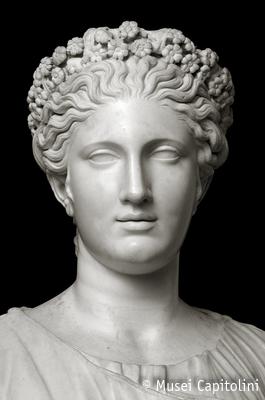 Statue of a standing girl, resting her weight upon her left leg, while her right leg is slightly bent.
She is wearing a chiton and a mantle, which drapes over her body. On her head is a flower wreath, while the flowers she is holding on her left hand are the result of a modern restoration.

It was one of the most famous sculptures of the ‘700 and according to Winckelmann one of the most beautiful statues in Rome.
The young girl has been thought to represent Flora, the goddess of spring, largely because of the flowers she is wearing in her hair, but the identification is still uncertain. Another possibility is Empress Sabina, wife of Hadrian, or a maiden portrayed as the personification of a Season. A theory advanced already in late ‘700 has been recently revived and identifies the figure with Polyhymnia, in comparison with the so-called Polimnia del Vaticano and the Small Herculaneum Woman.

The work dates to the Hadrianic period (117-138 AD), and is still unclear if is the copy of an original Greek work or a Roman elaboration of late classic themes. It comes from the Pecile of Villa Adriana.
It was donated to Benedetto XIV and, like many other works in the Sala del Galata, was seized by the French after the Treaty of Tolentino. It was restored to the Capitoline collections in 1815.