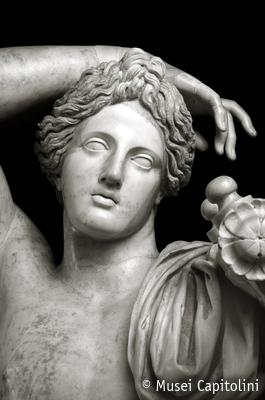 Statue of Apollo holding a large cithara (lyre). The god is nude except for a mantle thrown over his left shoulder; he is caught in a pause of his musical activities and he is gazing into the distance with a thoughtful expression . The figure’s weight rests entirely on his right leg. The pose is slightly awkward and balanced only by the strange positioning of the god’s right arm over his head.
The thick long locks of hair, dressed in a knot, indicate the young age of the god. Long hair was prerogative of free born boys, it was cut at the coming of age (ephebeia) and dedicated to Apollo, while girls had their tresses cut before marriage and dedicated them to Artemis.

This work is a sort of Roman variation, rather than a copy, of a famous work attributed to the Greek sculptor Praxiteles (340-330 B.C.).

. The original model must be dated after 336-335 BC, when the ephebeia was reorganized and the Gymnasium at the Lyceum was built.