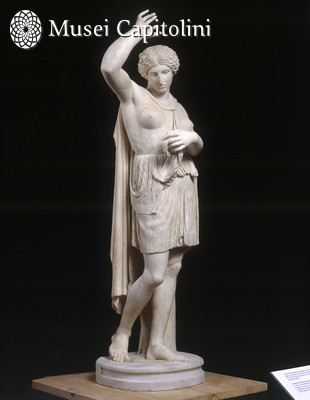 Known as the “Capitoline type” Amazon and found in about almost thirty copies, this representation of an Amazon is also called the “Sosikles type” due to the signature in Greek letters affixed on the support of the statue.

According to tradition, the sculpture was made on occasion of the competition that occurred at the sanctuary of Artemis at Ephesus to see who could create the most beautiful statue of an Amazon.

Amongst the famous sculptors who participated were Kresilas, Phidias, and Policletus, who was declared the winner.

Her right arm is raised, perhaps originally brandishing a spear, while her left one lifts the hem of the drapery revealing the wound.

The statue belonged to the Albani Collection, where it is recorded as early as 1733. It was integrated by Napolioni, maestro of Bartolomeo Cavaceppi.