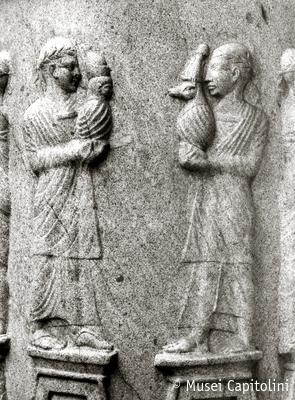 The column in granite from Elba, originally with base and capital in white marble worked separately, is essentially equal in type and carved decoration to the other two columns displayed in the Courtyard of Palazzo Nuovo.

The figurative decoration is carved in high relief around the shaft and consists in four pairs of priests or cult attendants, facing each other and standing on high stools; their heads are shaved and wreathed with laurel leaves. All the figures wear Egyptian-style sandals; the canopic jar bearers are clad in long, high-necked tunics, while the other attendants have the upper part of their bodies uncovered.

The first pair depicts two priests, the one on the left holding a standard surmounted by Horus, the one on the right presenting papyrus flowers; in the second pair the priest on the left holds items that are not clearly identifiable, perhaps a papyrus plant and a censer, while the priest on the right is carrying a lotus-shaped censer. The third pair features two priests holding canopic jars: the jar on the left is provided with a head of Osiris, that on the right with the head of Anubis. The priests in the fourth pair offer a palm and a canopic jar surmounted by the heads of Isis and Osiris.