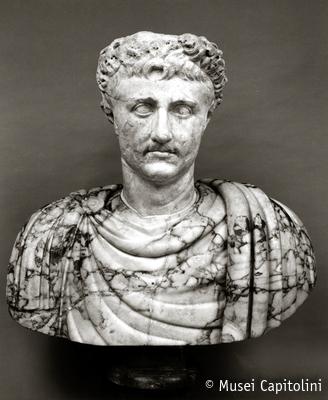 The colossal-sized portrait does not belong to the body on which is mounted. It certainly represents Augustus, as it is clear from the facial features and the style of the curls on the forehead arranged in the so-called “claw style”.

The portrait was possibly made after the death of the Emperor, as may be suggested by the oak-leaf civic wreath worn on the head and indicating the highest honour decreed by the Senate.

The neck, added during a modern restoration, shows vigorous muscles and a decided rotation towards the left shoulder, and it may belong to another ancient portait head (Caligula). The work can be dated in the Tiberian period (14-25 AD).