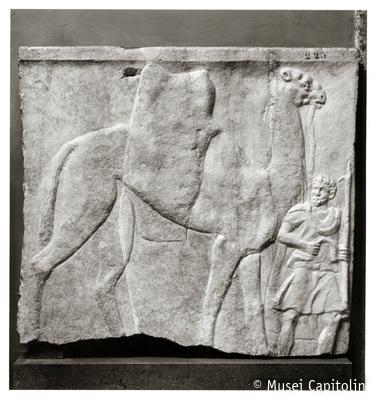 The slab, bordered by a fillet on the upper edge, most likely originally decorated the side of a sarcophagus. It depicts a dromedary in movement from the left towards the right, preceded by a male figure, dressed in a short tunic and cloak, with a goad in his right hand and the end of a rope in his left.

The quality of the marble, the presence of the upper fillet, the flattened rendering of the composition, which in the background becomes an outline, suggest that the slab most likely decorated the short side of a large sarcophagus; it is also possible that the rest of the moulded framework, visible near the shims, delimited a panel that was placed on the front, while the depiction of the deceased may have been placed in the centre.

Depictions of dromedaries replace those of camels in the Greek world starting from the 4th century BC: they are found on a great number of objects with different uses and characteristics, from statuettes to votive reliefs, from coins to historical reliefs, from household objects to mosaics.

The Dromedaries were used for transporting goods along the trails of the desert areas in the East or Africa; however, the absence of a load leaves out the possibility of associating our image to trade activity. A comparison with the high northern Arabic saddles known through palmyran reliefs, which in the side view can even exceed the height of the dromedaries’ heads, in fact indicates that it is a pack saddle covered by a saddle cloth that falls below the animal’s belly, rather than a load.

The flattened rendering of the relief, the use of a carved line that in some sections outlines the figures, the treatment of the beard and, in general, the shape features of the head of the person with the dromedary and the considerable height of the chest suggest to date the fragment to the first half of the 3rd century AD (200-250).