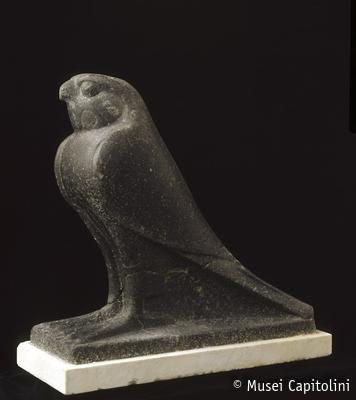 The hawk, carved from a single block of black granite, well smoothed and without any indication of plumage, is depicted here with its feet on the ground and wings closed on its tail.

It is the most common sacred animal in Egypt, venerated as a solar deity, symbol of Horus and often identified with the Pharaoh himself; this is the reason why hawks often bear the Double Crown of Lower and Upper Egypt. Also this statue had originally wore the crown as suggested by a hole visible on the head. In Egypt and Rome, the hawk was always associated with the places devoted to the worship of Isis, because Horus was the offspring of the union between the goddess and Osiris.

The work dates to the late Saitic period or early Ptolemaic period.

The provenance of the statue is controversial: it may come either from Hadrian’s Villa in Tivoli, or as it has been recently put forward, from Villa Casali on the Caelian Hill, the seat of the Iseum of the Regio III.