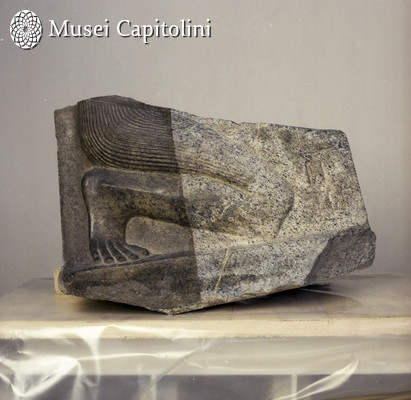 The statue in grey granite is preserved only in its lower half; depicted is a kneeling man wearing a tightly pleated ritual skirt (shendyt). The sculptural type is known as Naophoros for the figure (either deceased or living) is shown in the act of carrying a temple (naos) or a deity in a procession.

The typology of the statue was very common in ancient Egypt and was used to represent many leading personages such as pharaohs, priests and notables.

Statues of Naophoroi were usually placed within the precincts of sanctuaries so that the person represented could participate in eternity in the worship of the deity and the offerings in its honour.

The identification of the statue with Ramesses II, the great Egyptian Pharaoh, famous for his military exploits and his role as a tireless builder, is assured by the inscriptions carved on the pillar.

According to this identification, the work can be referred to the XIX Egyptian dynasty, which flourished in the 13th century BC.

The sculpture was found in 1882 in via Nazionale on the occasion of excavations associated with the building of the Palazzo delle Esposizioni; in the late nineteenth century in the same area were also discovered a Nilotic mosaic and a base with the depiction of the Nile. It has been suggested that all these findings had originally belonged to the decoration of the Temple of Serapis, which presumably was located either in the Piazza del Quirinale or near the church of San Silvestro al Quirinale.