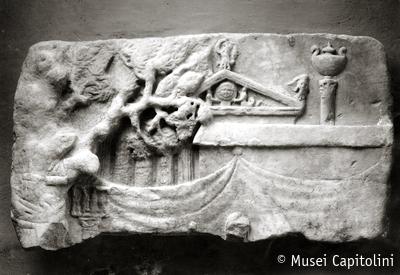 The fragment shows a complex representation on several planes. In the centre of the scene, one can recognize the pediment of a temple decorated with a shield with Gorgon ’s head, held up by two Tritons . The uppermost decoration on the temple pediment (acroterion) is formed by the statues of the two Victories.

The relief could refer to monuments and places that actually existed and not a generic country landscape: one theory identifies the temple with the one of Victory on the Palatine Hill.

Only the upper left part of the original relief remains. The surfaces are noticeably worn.

The fragment,founded near the Auditorium of Maecenas, has been dated to the early Augustan period (27 BC- 01 AD).