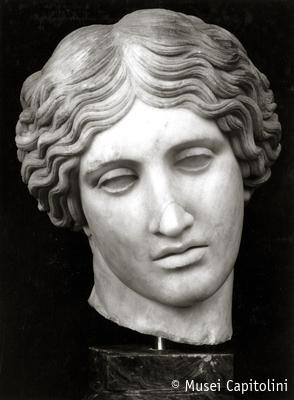 The head, leaning slightly downwards and with a pathetic look, belongs to a statue of a wounded Amazon, a statuary type conceived in the 5th century BC, of which numerous replicas exist.

The statute, to which the head belonged, depicted an Amazon with her right arm raised and left arm bent, bringing her hand close to the wound inflicted beneath her right breast. The original has been attributed by some scholars to the sculptor Kresilas, even though the prevailing opinion assigns the origin to Polykleitos.

This example shows a good quality of execution of the hair, divided into two wavy bands gathered at the nape and rendering of the surfaces of the face, softly modeled; traces of polychromy can be noted on the hair.

Found in the Auditorium of Mecenate.