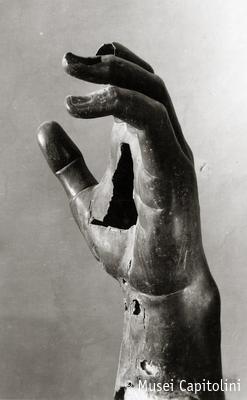 The hand is a work in bronze characterized by a clear green patina. A laceration on the inside of the hand indicates that at one time it held an object that was later torn away.

It is hard to doubt that this is the hand once kept at the Lateran along with many of the other objects displayed in this room. Most probably, this hand held one of the bronze balls found within the Museums’ collection. The evidence of medieval records suggests that this hand could have been displayed alongside the Colossal Head of Constantius Chlorius and the Equestrian Statue of Marcus Aurelius since as early as the mid-fifteenth century.

It is not known if the hand first came to the museum as part of the donation of Sixtus IV. By 1527 the hand was present in the portico of the Museums. For over five centuries it has been an integral piece of the Museums’ collection.

The work was probably found near the Lateran.

← Male Portrait
Candelabra with Triangular Base →