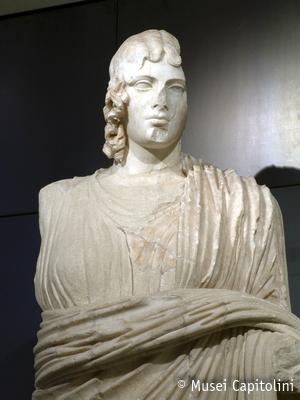 The depicted character wears a long chiton and, on top of that, a himation that covers her left shoulder, while the right one is left bare; the cloth is then clad on the front and held up by her left outstretched arm.

The figure rests the weight on the left leg, while the right one is bent and brought backwards, touching the ground with the tip of the foot. The himation is gathered around the waist with a thick flap formed by overlapping folds. The cloth, which leaves her feet uncovered, adheres to the shape of the body on the right side of the figure, while it drops straight down on the left.

Many parts are the result of restoration: the nose, the chin, some parts of the tunic and mantle, the left side of the head, the right arm from the shoulder and the left hand from the broken wrist, while the plinth is modern.

The lack of attributes in the comparable replicas makes it difficult to identify the character, even if it unquestionably represents a goddess because two replicas of the same statue are larger than life-size. The short haircut does not offer any clue either: one might only infer that the statue depicts Demeter or Kore because such type of figure is reproduced on a relief from Eleusis of 460 BC.

The statue was found in Via Leopardi near the Auditorium of Maecenas.