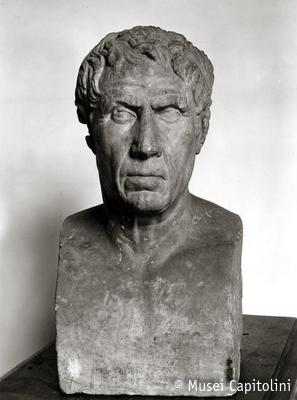 The herma depicts a strongly characterized elderly man. His short, straight hair is combed into sparse, disorderly locks on the forehead; his forehead is furrowed and his eyes, with deep wrinkles at the sides, reveal a concentrated stare, almost pain-stricken. Wrinkles also frame the mouth, with fleshy, closed lips .

The portrait has been variously identified with that of Virgil, Theocritus or Aristarte III of Cappadocia.

The herma is made in Pentelic marble and dates to the 1st century BC. It was found in 1874 in the Auditorium of Maecenas .