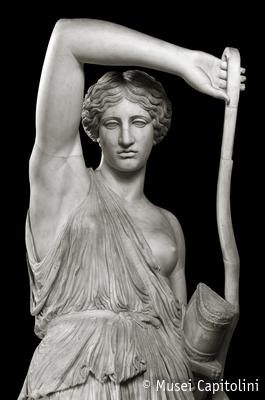 This sculpture is identified as a replica of the first imperial period (10 BC-10 AD), of the famous Wounded Amazon made by the Greek sculptor Phidias. The woman wears a light chiton that covers only one shoulder and thus reveals her left breast. The figure is leaning on the right leg; the left is flexed so that only the toes touch the ground. The raised right arm is bent at a right angle above the woman’s head and her hand grips a bow, the arrows for which are carried in a quiver worn at her side.

Although the head of the figure is ancient , it is not pertinent, and was attached to the statue in 1775 in place of the missing original.
It is either this statue or the Amazon by Sosikles now - Scu 637- that was found on the Palatine Hill in Vigna Roncone and sold to the Cardinale Ippolito d’Este in 1570. It was then bought in 1753 and eventually gifted to the Capitoline Museum by Benedict XIV in 1753.

← Statue of a Child with a Mask
Male Herma →