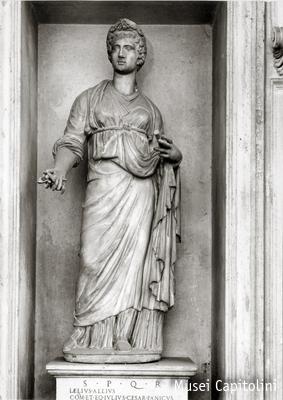 Female statue restored as Thalia, Muse of Comedy, through the addition of a flute in her left hand (only a fragment is still visible today) and a theatre mask in her right.

The shoes, at the feet of the Muse, with interwoven straps (calcei matronali) and the peculiar position of the cloak, gathered and resting on the left arm, are noteworthy.

The statue was donated by Pious V to the Capitoline in 1566 together with the Muse Urania, also displayed in Shelf I of Palazzo dei Conservatori.

The head, wearing a laurel-wreath, was also added during a restoration that certainly occurred before 1584, when the work was represented for the first time.

The work is an early Imperial copy of a Hellenistic model and it originally belonged to the sculptures decorating the Casino del Belvedere in the Vatican.