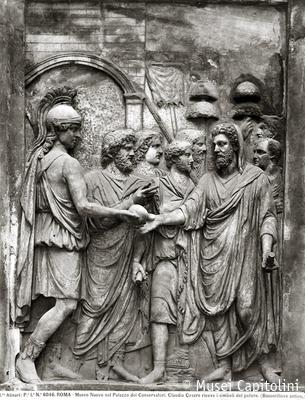 The relief represents Hadrian entering Rome, greeted by the personification of the city, dressed as an Amazon.

In the image, Hadrian, wearing a toga, enters Rome surrounded by his body guards: to his right there is a lictor with fasces, symbols of power and imperium, behind him there are two standard bearers with military emblems.

It was believed that the personage depicted was Marcus Aurelius and for this reason the original head, probably already missing when the relief was taken away from the arch, was replaced by a bearded head believed to be Marcus Aurelius.

In the early 1900s, the latter was replaced by a copy of the portrait of Hadrian today displayed next to the relief, on the first shelf of the staircase of the Palazzo dei Conservatori.

It originally decorated a honorary arch located near todays Piazza Sciarra, between via di Pietra and via Montecatini, destroyed around 1527.

Acquired in 1573 by the Conservators, the relief was placed where it is still displayed today, next to three panels of Marcus Aurelius.