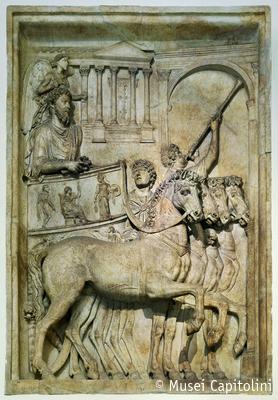 The relief comes from the decoration of a triumphal arch erected in AD 176 in the Roman Forum at the foot of the Capitoline Hill to celebrate the Emperor Marcus Aurelius’s victories over the Germanic peoples and Sarmatians.

Together with the other two panels walled in Shelf I of the staircase of the Palazzo dei Conservatori, it depicts an episode in the life of Emperor Marcus Aurelius.

The work was created during Marcus Aurelius’s reign, in the years ranging from AD 177 to 180.

The arch most likely had already been destroyed in the 6th century AD, when the first descriptions of the reliefs record them as being walled in the walls of the church of S.Martina, built in the Roman Forum upon the ruins of the Secretarium Senatus, a hall of the Curia, site of a penal tribunal, established in the 4th century AD.