The girl, clad in chiton and mantle, is standing, with the upper part of the body turned backwards; she holds a dove in her left hand, embosoming it, in a gesture of protection from a foe (now restored as a snake) that is attacking them from the left side. 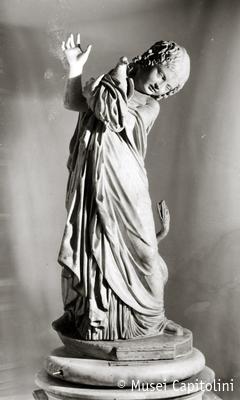 The statue is a Roman copy, datable to the early imperial time, of an original work which can be referred to a Pergamene workshop active in the Hellenistic age.

The Hellenistic art, in fact, developed a deep interest in all the aspects of every-day life, and in particular in the representation of children, often depicted while playing.

Formerly in the collection of the Alessandro Albani, the statue was acquired for the Capitoline Museum in 1733 and immediately displayed in the Sala delle Colombe; transferred to the Sala del Galata in 1830, the statue resumed its actual location in 1945.