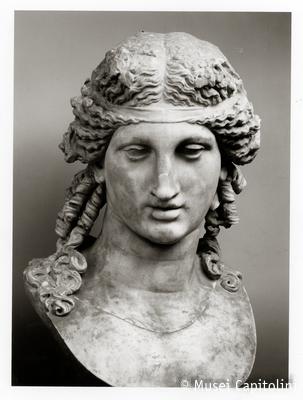 The head represents a young Dionysus .

The face is turned to the right and the gaze is directed slightly downward. He has a thick mass of curly hair which is held back by a band, under which is barely visible an ivy crown, and falls in long locks to his shoulders. At the back of the head his hair is dressed in an elaborate knot.
The work is a Roman copy of a fourth century BC original and dates to the time of Hadrian (117-138 AD).
The sculpture is part of a group of works gifted to the City of Rome by Pio V after 1566.