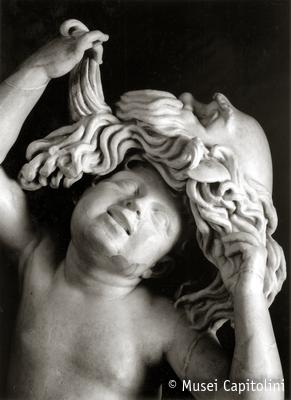 This work depicts a chubby young boy sitting atop a goat skin with his legs casually crossed. In his upraised arms the boy holds the mask of a Satyr, his hands struggling to support its weight by clutching tufts of the beard.

The mask is typical of pieces worn in Greek theater produced in the New Comedy period. The mask represents a bald, aging satyr whose eyes and mouth are opened in an exaggerated manner. Its eyebrows are knit in a frown and its hair flows easily in long fluid locks.

The skill of the sculptor is evident in the chiaroscuro effect achieved in his treatment of the mask’s hair and beard. He has also brought a variety of textures to the stone, such as the smooth, porcelain-like skin of the child which contrasts interestingly with the thick and heavy locks of the mask’s hair.

From the collezione Albani, the work dates to the beginning of the Imperial period (20-60 AD).