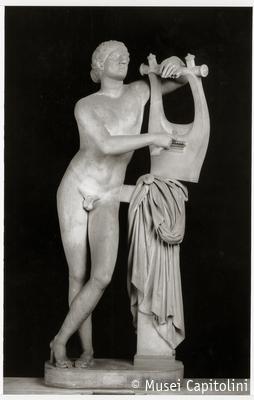 Replica of Skopas’ Pothos, later restored as Apollo Citharoedus : the addition of the large cithara on the right reinterprets the figure as Apollo.

The figure of the young man appears constructed on the base of the original model, following a chiastic rhythm that governs the crossed arrangement of legs and arms and with a marked unbalancing of the hip on the right that gives the figure a decidedly sensual and sinuous pose.

Skopas’ originals, created for the sanctuaries of Megara and Samothrace, were much beloved in the Imperial period and were used as a model for the decoration of the rich private doums, where personifications of the various stages of love were popular.

The work is a copy of the 2nd century AD and it was found near the Quirinal Hill.