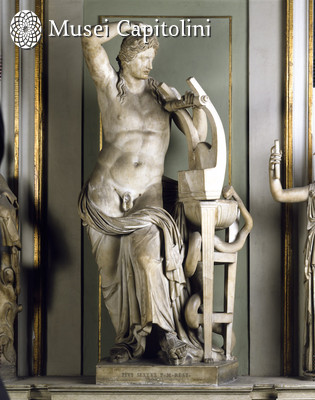 The god Apollo is represented naked, with the exception of a himation (cloak) that falls in full-bodied folds and covers the lower half of the figure.

The figure carries its weight on the right leg, while stepping forward with the left. This causes the right hip to jut out slightly, an imbalance that is compensated by the movement of the right arm, which is raised and held at a right angle over the head. The god rests his left hand upon a large cithara supported by a tripod. It is likely that the statue originally had a laurel wreath upon his head, as is in the case of the Apollo from Cyrene.

The work was found near Villa Palombara on the Esquiline hill and is a mid-Imperial period copy of a 4th century BC original.