Female bust cut under the breast and dressed with tunic and cloak.

A considerable resemblance with a portrait of Julia Domna from Gabii was noted. The hairstyle of the Capitoline head is inspired by an actual hairdo, in fashion for quite a long time between the end of the 2nd and the beginning of the 3rd century AD and not only found in Julia Domna, but also before her at the time of Commodus (AD 180-192), in Crispina and Corinificia, wife and sister of the emperor. 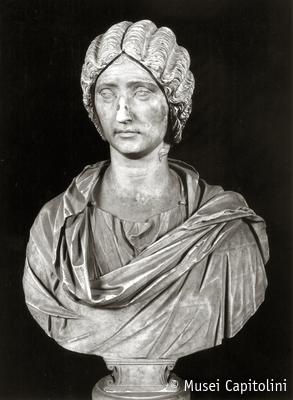 The hair, once removable, was lost and replaced by the current one in plaster, we do not when, but likely at the time of the formation of the Albani collection . The lack of the original hair and the loss of some details of the face do not allow a certain identification.

The face, slightly turned towards the right, is characterized by thick eyebrows, eyes marked by thick eyelids, with carved iris and pupil, wide nose and tightly closed lips. The hair, once removable, is styled in a typical Severan manner : soft waves framing the face are then gathered in a circular bun on the nape of the neck.

The wig was probably supplemented because the portrait was identified with Julia Domna, perhaps on the basis of the face features and the shape of the bust; besides, the latter can be dated between AD 185 and 220.

Given the uncertain identification, one cannot rule out the possibility that it might be the portrait of a high-ranking Roman matron, although the polishing of the marble that gives the skin on her face too much of a youthful look may not suit such an interpretation.