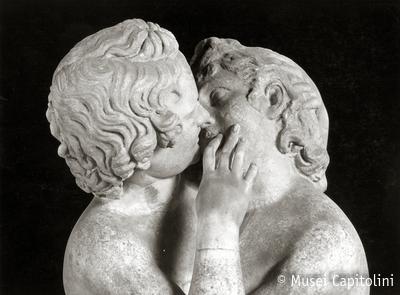 Group of Love and Psyche wound in a tight embrace and kissing each other.

The weight of both figures rests on their internal leg, while a marked rotation of their bust allows them to embrace each other.
They are totally naked except for a cloak that covers the body of Psyche from her hips down and falls between her legs with an interplay of folds.
The love between the god Cupid and the human Psyche was a very popular theme in antiquity and found its literary climax in the tale that appears midpoint in Apuleius’ novel Metamorphosis. It was readily allegorized to express the passage to the After-life or to justify marriages between different social classes.

Among the many portrayals of the subject, in the slightly earlier group now in Berlin, Cupid is represented with bird wings and Psyche with butterfly wings.

The work is a copy of a very famous Hellenistic original and dates to the late Hadrianic / early Antonine period (130-160 d.C.).
It was found near the church of Santa Balbina on the Aventine Hill in 1749 and became part of the Collezioni Capitoline. It was seized by the French after the Treaty of Tolentino and was given back in 1816.