The portrait features a boy whose treats recalls those of Pertinax Caesar , the son of the emperor Pertinax, who was princeps iuventutis (a honorary title conferred to young members of the imperial family) 193 AD. 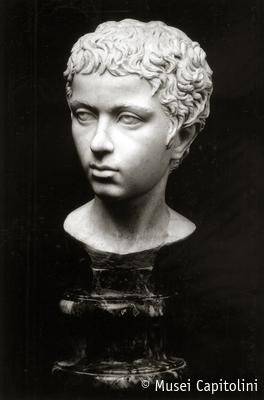 Originally the portrait was meant to be mounted on a full-figure statue.

The thin face is characterized by wide eyes with iris and pupil incised, brushy and asymmetrical eyebrows, large nose and fleshy lips. The hair is arranged in small wavy locks that follow the profile of forehead and skullcap.

The identification with Pertinax Caesar, if correct, allows to date the portrait to the late 2nd century AD.

Formerly in the collection of cardinal Alessandro Albani, the portrait was acquired for the Capitoline Museums in 1733.