The bearded statuette, standing on the left leg with the right slightly bent, depicts Asclepius; the god wears a mantle (himation) which uncovers the right shoulder; since both the right arm and left hand are broken off, it is not possible to say whether the figure was holding the staff with a coiling serpent which is usually associated with images of Asclepius. 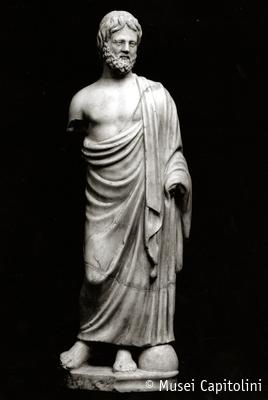 The statuette, dated to the early imperial age (1st/2nd century AD), was found in Bevagna, in Umbria, and acquired for the Capitoline Museum in 1813.