The child Hercules , with the lion skin covering the head and tied on the chest, rests on a club and stands with his weight on the right leg; the right hand is placed behind his back and holds the three apples of the Hesperides which hint at Hercules’ twelfth and last labour. Both legs and the left arm are the result of a modern restoration. 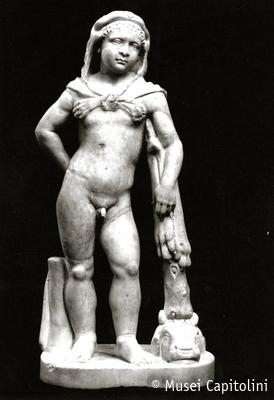 Two similar statues featuring a child Hercules with the Hesperides, are today displayed in the Salone of the Palazzo Nuovo (Scu 1016) and in the Sala degli Horti Lamiani in the Palazzo dei Conservatori (Scu 1103); the attitude of repose recalls the colossal Hercules Farnese now in Archaeological Museum in Naples.
The statue dates between the end of the Antonine and the early Severan epoch. It was found in Bevagna , Umbria, in 1813.