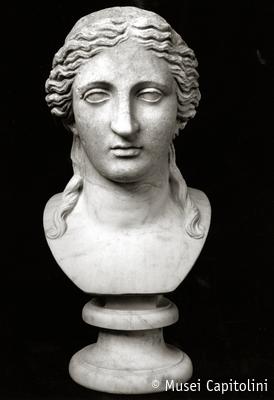 The head, set on a modern bust, features a female divinity whose identity is difficult to determine.
The hair, parted in the centre, is arranged in wavy locks tied back in a knot; two locks fall on each shoulder. The crown of the head, left rough, is divided from the front hair by a wide groove which originally may have held an ornament (a wreath or a diadem) in a different material. The face, extensively restored, is characterized by a rather melancholic expression.

The head is a Roman copy of a Greek original in bronze created in the 5th century BC.

Formerly in the collection of the cardinal Alessandro Albani, the head was acquired for the Capitoline Museum in 1733.