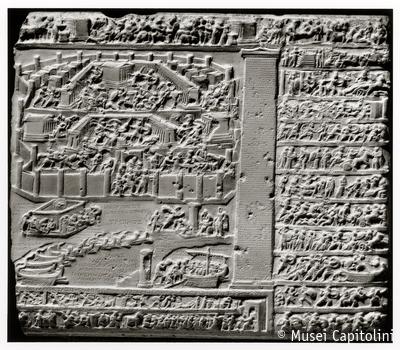 This fragmentary limestone slab is one of the 19 Tabulae Iliacae known so far; these are miniature stone slabs on which are depicted episodes from the Homeric poems captioned with inscriptions.

The composition is divided into two sections by a pillar; the subjects depicted are indicated by Greek inscriptions. Episodes from the Iliad are illustrated on the upper frieze and on the eleven bands at the right of the pillar. The centre of the slab is taken up by the famous episode of the Trojan horse and the last moments of the siege of Troy (Ilioupersis). Scenes extracted from the Aethiopis and the Little Iliad of Lescheo of Pyrrha are carved on the lower register.

The Tabula Capitolina is one of the best preserved specimens extant and dates back to the late Republican period or to the beginning of the Augustan age.

The slab was found a little before 1683 in the ruins of a villa known as Tor di Messer Paolo, to the south-west of the road to Marino, near the Villa of Voconius Pollio. After having been in the possession of the Spada family, the relief entered the Capitoline Museum in the 1760s, under Clemens XIII.

← Group of a female figure and a boy
Inscribed cippus →