Found in the series of sculptures of Florentine Niobids , due to a similarity to these statues and actually being a copy, for a long time this statue was believed to be a daugther of Niobe of the original series; three of the four known copies have wings, or at least bear traces, lacking instead in the fourth. 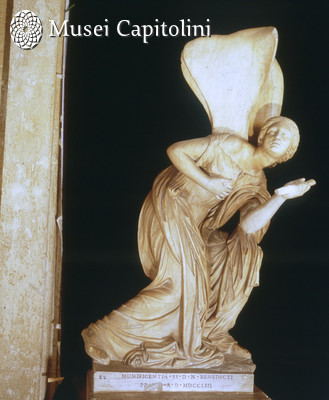 Perhaps the statue, which at first was a Niobid, was provided with wings and, thanks to this new attribute, transformed into Psyche: such a reason could explain its isolation.

However, this theory has some weak points, above all the fact that the Florentine Psyche has wings, though it was found with the series: therefore, it could have survived through time together with the series itself.

After all, the strong bone structure, the regal rendering of the head and the elaborate draping of the statue suggest a closer relation with the original Psyche rather than with the Florentine series. This is the less damaged of the four representations of the type and, excluding the one at the Louvre, it is the best existing copy.

The rendering of the draping, the shape of the head and the hair can be compared with the sculptures of the school of sculptors of Skopas and Praxiteles , although the work was surely finished as a Roman copy.

The statue was found at Villa d’Este and acquired in 1753 by pope Benedetto XIV for the Capitoline Museums.