The sculpture depicts one of the children of Niobe, slain by Apollo; it was part of a group that depicted the massacre of the Niobids, the original of which has sometimes been attributed to Skopas. 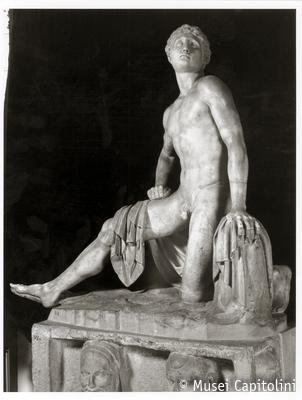 The face betrays the clear pathetic tone, evident in the rendering of the eyebrows, eye sockets and full, open lips.

The youth, completely naked except for a cloak that falls on part of his right thigh, is depicted with his left knee on the ground and his right leg straightened out to the side. The bust is twisted towards the left, the side towards which the head is leaning also, consequently the shoulders are quite unbalanced.

The setting of the killing of Niobe’s children in a rural scenario is guaranteed by the rendering of the statue’s base, modeled like rocky ground and by the rock-shaped spur upon which the young boy rests his hand in the attempt to hold himself up.

The work, found probably in Rome, is considered to be a Roman Imperial copy of a 4th century BC Greek original.