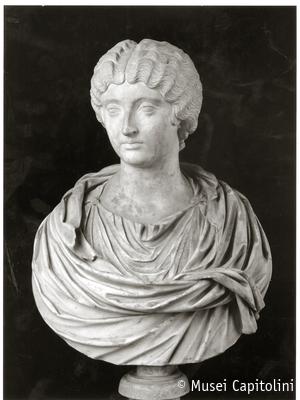 The portrait features the empress Faustina the Younger, wife of Marcus Aurelius; the bust, cut down just below the breast, is clad in tunic and mantle.

The hair is combed in wavy locks, parted at centre, drawn down at the sides to cover the ears and twisted in a knob on the nape. Faustina adopted this particular hairstyle on the occasion of the birth of her two twins, the future emperor Commodus and Fulvius Antoninus in AD 161. This type of portrait became utmost popular throughout the Roman Empire and was copied many times.

Formerly in the Barberini collection, the bust was presented by the Cardinal Spinelli to Benedict XIV and by him to the Capitoline Museum.