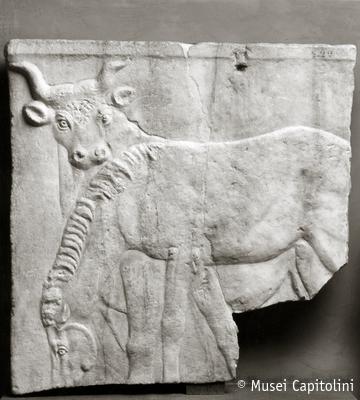 The slab, bordered on the upper part by a fillet, depicts a horse grazing in the foreground and an ox partly visible in the background.

The quality of the marble, the presence of the upper fillet, the flattened rendering of the composition, which in the background becomes an outline, indicate that the slab probably decorated the short right side of a large sarcophagus; it is also possible that the rest of the moulded framework, visible near the shims, delimited a panel that was placed on the front, while the depiction of the deceased may have been placed in the centre.

The animal iconography recalls country-rural images found on the side of numerous sarcophagi, especially the group with the illustration of the encounter of Selene and Endymion , characterized by the figure of a shepherd in an exomis (midthigh-length tunic fastened at the shoulder with a buckle).

The flattened rendering of the relief, the use of a carved line that in several sections outlines the figures and the considerable height of the chest, suggest to date the slab to the first half of the 3rd century AD.