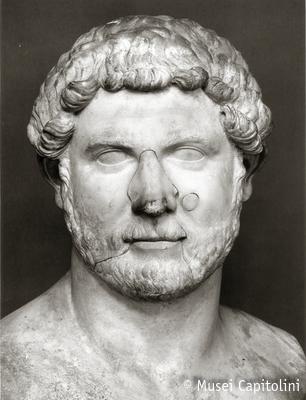 The oval face, turned to the right, is dominated by the elongated cut of the eyes, the expression of which is accented by the strong brows, the regular nose and the beard that frames his face meeting the hairline on the temples.

The shaping of the face is rendered with skilful shades that mark the wrinkles of the skin in a natural way; the features are clearly outlined, according to the stylistic method typical of the early Hadrianic period. The eyes still lack the internal carving, like all of the other copies of the type.

The smooth and shaded complexion is opposed to the hair, which stands out for its moulding; movement, thickness and sheen of the hair are rendered in a naturalistic manner.

The bust belongs to an iconographic type known as “Vatican Chiaramonti 392”, of which there are more than twenty known examples. Comparisons with coin issues and the still young features date the creation of the official model to AD 118, for the celebration of Hadrian’s arrival in Rome as the new emperor or his nomination as consul for the second time.

The style features confirm the dating of the sculpture to the early Hadrianic period (118-130 AD), close to the official prototype.