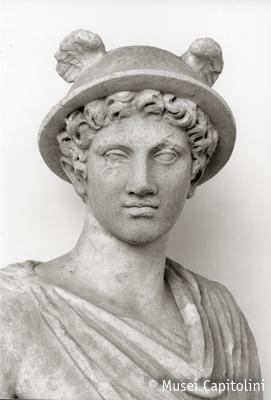 Statue of a young male god, standing, with his weight on his right leg and his left leg behind him. The figure is wearing a full cloak with wide hems, clasped with a buckle on his right shoulder and covering his torso diagonally, then falling on his opposite arm at his elbow.

The identification of this youthful figure with Mercury is due to the presence of two typical attributes of the god: the winged hat (petasos) and the caduceus (a staff entwined by two serpents), which, like the object held in his left hand, are the results of additions made in a later period. The lacking of the original attributes does not allow to identify the statue with a specific god.

The statute type, in a pose typical of the sculptor Polykletos, fits the image of young gods such as Mercury, Apollo and the Dioscuri.