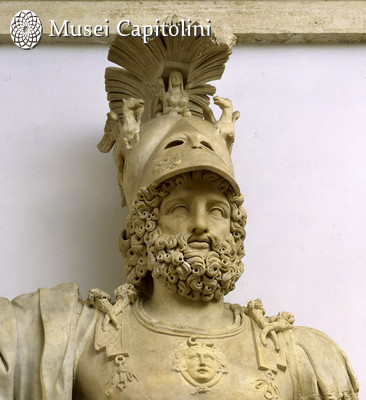 The colossal statue depicts Mars Ultor, the god worshipped in the temple that dominated the forum of Augustus. The identification with Pyrrhus, the famous King of Epirus, was prevalent until the 18th century and was based on the presence of elephants in the decoration of the fringes of his clothing (pteryges.).

The statue is based on an Augustan original, rebuilt through copies and modifications, and clearly shows its classic matrix; the original Augustan work, in accordance with the cultural climate of the period, broadly speaking draws upon a 4th century BC late classic model.
The lack of differentiation between the locks of hair and beard, together with the characteristic shape of the lower lip, are elements now considered typical of 2nd century AD productions.

If this dating is correct, it is unlikely that the sculpture could have been part of a religious group; the question of its original location thus remains open, but it cannot be ruled out that it could have decorated another sector of the Forum of Nerva .

The statue was found in the 16th century in the Forum of Nerva. After having been placed in several patrician homes, it was acquired by Pope Clemente XII in 1736 and taken to the Capitoline Hill in 1740.