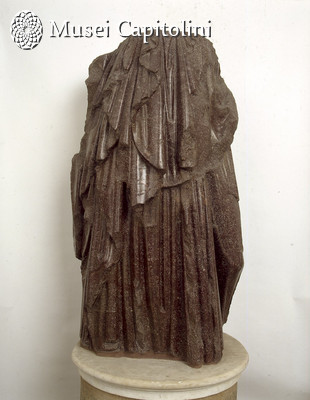 The fragmented colossal statue, usually interpreted as a female figure, could actually depict Apollo Citharoedus and therefore be integrated with a cithara on its left arm.
As a matter of fact, the Doric peplos, which is typical of the images of Athena, was also associated with representations of Apollo Citharoedus starting from the mid-4th century BC; in addition, both the pose of the fragment and the cithara, which perhaps was lent on the left arm originally wrapped in the drapery, are consistent with the iconography of the god.
The fragment shows an eclectic inspiration: while the zig-zag opening of the peplos on the right derives from models datable to the 5th century BC, the high belt and the drapery clinging to the left calf appears to be influenced by the style of Skopas, who was active in the late 4th century BC.
The fragment stands out among the known works in porphyry for the complexity of the drapery which, avoiding the simplification common in the working of this particularly hard material, shows instead remarkable sensitivity and a vivacity.
The statue can be dated to the Julio-Claudian period (30-60 AD), presumably to the reign of Nero, during which, in fact, the figure of Apollo Citharoedus enjoyed renewed popularity.
Various references to porphyry works in ancient literary sources and the existence of numerous exemplars permit to overcome the traditional reserve in dating porphyry sculptures as early as the 1st century AD.
In 1730, the work was at the bottom of the stairs of Santa Maria in Aracoeli .