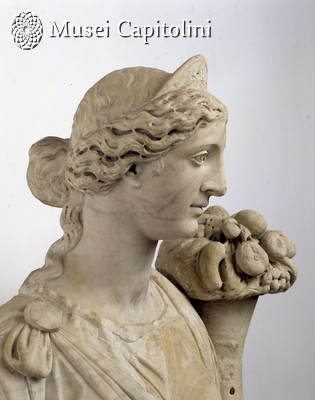 The figure is wearing a sleeved chiton, girt with a belt just below her breasts. Over the chiton the figure wears a cloak that falls from the left shoulder and covers the legs almost entirely.

The statue can be included in a large group of replicas often used to depict Fortuna and others associated with Fortuna and Fortuna-Isis.
The sleeved chiton, the himation himation and the cornucopia are features shared with the innumerable replicas of the sculptural type which is represented not only by full-size exemplars and bronze statuettes, but also by figures carved on reliefs, gems and coins. The Capitoline statue, however, diverges from the general type because of a number of details, such as the drapery of the himation, the shape of the roll around the waist and the globe beside the right foot.
The sleeved chiton girded below her breasts, the that goes from her left shoulder to her right side and the cornucopia in her left hand are elements shared by the innumerable full figure examples, even small bronze artifacts and in reliefs, glyptics, coin issues. The similarities end here because there are many differences found in the way the himation is made, in the shape of the roll in front of her body, as well as whether or not there is a helm on the globe on the ground to the right.

The weft of the chiton of the Capitoline specimen, with the drill markings, is similar to images found at Villa Doria Pamphili and Villa Albani; the pleated robes, alternated with smooth sections, show analogies with some plinths with personifications in the Hadrianeum at Campo Marzio.

The sculpture, created in the Antonine epoch (138-191 AD), comes from the Vatican and has been documented in the Palazzo Nuovo since the late seventeenth century.