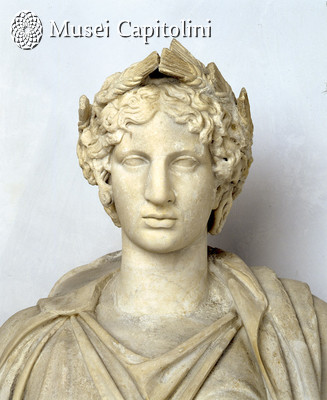 Female statue wearing a long robe (peplos) with the hem falling on her shoulders (apoptygma) and short cloak (clamys).

The head wears a small corn-ear wreath (made in plaster and product of restoration).

Some attributes lead to its identification as a Bacchante: the bunch of grapes in the left hand, the crotales (percussion music instrument) in the right hand, the instrument used to beat rhythm under the foot (scabellum).

The identification of the statue was subject to many interpretations due to restorations, which modified its appearance: at first, it was identified as Pomona, then as Semele and Ceres.

Its interpretation as Bacchante is due to the integration of the aforementioned attributes (crotals and scabillum) added when the statue was part of the Albani collection.

The head does not belong to the statue and actually depicts a male divinity, perhaps Apollo.

The work is likely a Roman copy of the first half of the 2nd century AD from a Greek original dating to the end of the 5th century BC. It was probably found in Rome.